Uninsurance remains a problem in America, even in the age of the Affordable Care Act (ACA). That’s one conclusion that can be drawn from the latest survey results released two weeks ago by the National Center for Health Statistics.

The report (“Early Release of Estimates From the National Health Interview Survey, January–September 2015”) compares survey data on health insurance coverage gathered over the first nine months of 2015 with that of previous years, extending back to 2010. The estimates rely on a civilian, non-institutionalized sample, which for 2015 consisted of some 79,847 individuals in 37 states.   I’ll briefly summarize some of the key results in this post.1

The survey demonstrates a substantial reduction in the uninsured population in the years following the implementation of the ACA. In 2010, 22.3% of non-elderly adults were uninsured at the time at which they were interviewed. In contrast, for the first 9 months of 2015, this had fallen to 12.9%. This comes after about a decade of rising uninsurance, beginning in the late 1990s: 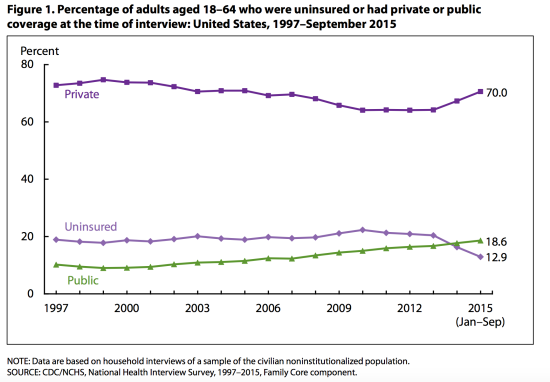 The time trends by age groups are as one might expect. For younger adults (ages 18-24), the reduction in uninsurance occurred over 2010 and 2011. This makes sense, as the dependent coverage provision of the ACA was implemented in September 2010 (the law required coverage of children below age 26 under family health insurance plans). For other age groups, in contrast, uninsurance fell between the years 2013 and 2015. This squares with the fact that the main coverage expansion provisions of the ACA – i.e. the individual mandate and the Medicaid expansion – went into effect in 2014.

Inequalities in insurance status by class persist. In 2015, among non-elderly adults, 26.1% of the poor and 24.1% of the near-poor were uninsured at the time the interview was conducted, as compared to 7.7% of those who weren’t poor. However, there were notable reductions in uninsurance among the former two groups between 2013 and 2015:

Coverage inequalities by race – despite improvements – also persist. In 2015, among non-elderly adults, 27.9% of Hispanics and 14.6% of non-Hispanic blacks were uninsured, as compared with 8.8% of non-Hispanic whites and 7.3% of Asians:

Addressing racial health inequalities, clearly, requires addressing these inequities in coverage (among many other things).

There were also inequalities by geography. Unsurprisingly, uninsurance among non-elderly adults was higher in states that have not yet expanded Medicaid under the ACA as compared to those that have (see this analysis for estimates of the number of deaths that have needlessly resulted from this “opt out”).

Finally, the survey reveals the evolving character of insurance: high-deductible heath insurance plans are on the rise. The percentage of the privately insured non-elderly with high-deductible health care plans (whether or not they are associated with a health savings account) rose from 25.3% in 2010 to 36.2% in 2015:

This is but one glimpse at a much larger story of rising deductibles and copayments – of underinurance more broadly – in the United States.

In sum, the ACA has clearly expanded coverage in the United States. In 2010, among those of all ages, 48.6 million were uninsured (determined based on the time they were interviewed) according to the estimates of this survey. For the first nine months of 2015, this had fallen to 28.8 million. This is no doubt a meaningfully and important change for the many millions who are now newly insured. Yet, the law is now in full effect, and millions are still excluded from coverage. Moreover, inequalities in coverage – along the lines of both race and class – persist. High-deductible health plans are on the rise. Universal health care has not yet been achieved.

1 Note that all the figures reproduced here from the report are in the public domain. All numbers cited in this post are from this survey. When I say “2015,” I am referring to the first nine months of 2015. “Non-elderly adults” describes those aged 18-64.