Newsletters are retro and trendy.  In an effort to not feel left out I’ve started one too. You can signup here: http://tinyletter.com/awgaffney

Given a paucity of current subscribers, I’ve decided to post the letter on this blog as well.  Here it goes …

This is the first of what I hope to be biweekly newsletters, which will combine what (if anything) I’ve written in the intervening period as well as some of the latest in health news/politics/policy (and other items of interest).

So this past week saw a rather vigorous exchange on everybody’s favorite topic (well, at least mine): single payer health insurance.  Hilary Clinton opened with a salvo about Sanders’ health care plan being a “risky deal,” as reported by the Washington Post, which would devolve responsibility for health insurance to state governors.  Chelsea Clinton one-upped this by describing Bernie Sanders’ single payer proposal as a rather frightening sounding scheme that might effectually “…strip millions and millions and millions of people off their health insurance,” as she was quoted by MSNBC.  Basically everybody agreed that this was nonsense.  Ezra Klein wrote about it here at Vox:

Hillary Clinton’s campaign has spent the past few days indulging its worst instincts. It blundered into a dumb attack on Bernie Sanders, but rather than back down it raised the stakes. The result has been a reminder, to liberals, of what they like about Sanders and mistrust about Clinton.

Well put.  I wrote a post (“Chelsea Clinton Grossly Misrepresents Single Payer“)  about the silliness of the Clintons’ charge, and also noted that Chelsea Clinton has little excuse not to have a handle on the issue given that she is something of a public health person (then again, so is Hillary Clinton).  Zaid Jilani of the Intercept also made the good point that, as the headline of his article puts it, “Hillary Clinton’s Single-Payer Pivot Greased By Millions in Industry Speech Fees.” Perhaps the best response was this tweet from the Bernie Sanders campaign, harkening back to an earlier era when HRC’s opinions on single payer were a bit different: 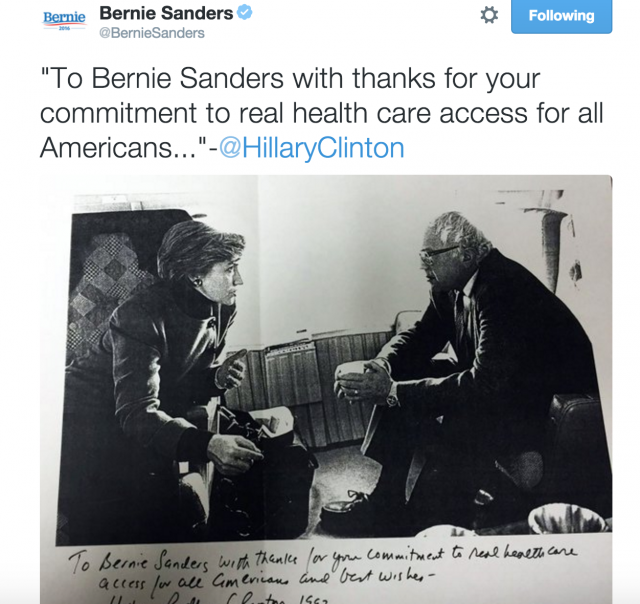 On the other hand, Matt Yglesias at Vox had a less helpful piece asserting, to some extent, that what really matters about single payer is lowering provider reimbursements, which might be done with or without single payer.  Indeed, implementing single payer without an across the board reduction in provider payments, he contends, would be very costly and not very useful.  I disagreed strongly with him in this post, “What’s wrong with Matt Yglesias’ Single Payer Analysis.” Now admittedly, I might be said to have something of a conflict of interest on the topic as a health care provider myself.  But that’s really beside the point: whether or not providers should be paid less is separate from the question of whether we should have a single payer system.  Single payer would have huge administrative efficiencies over our current fragmented mess of a system: it could save a great deal of money separate from the issue of provider reimbursement.  Fellow PNHPer Don McCanne had a more comprehensive take on his blog here.

In closing, consider having a look at a piece I wrote for The New Republic (online) about Sasha Issenberg’s forthcoming book, Outpatients: The Astonishing New World of Medical Tourism.  It’s a wacky world no doubt, and also a good book.  I more or less contend that medical tourism should be understood in the larger context of the corporatization of health care and a global retreat from a vision of universal public health care.

July 8, 2015 By Adam Gaffney in Uncategorized

I was on Peter Werbe’s radio talk show “Nightcall” out of Detroit on Sunday night chatting about Obamacare & single payer, available here (beginning at 02:07)

Democrats may be overly optimistic in their hopes that a Supreme Court ruling against Obamacare subsidies in King v. Burwell would be an unambiguous political disaster for Republicans.

The absurd, widely ridiculed claim tweeted by Senator John Thune – which suggested that the Affordable Care Act was to blame for the (potential) loss of health insurance  subsidies for six million Americans – was admittedly far too crude to gain traction:

At the same time, as reported yesterday by Politico and the Associated Press, Congressional Republicans are already readying proposals that would provide for the temporary extension of insurance subsidies in case of a victory of the plaintiffs in King.  Such proposals, however, would simultaneously gut key Affordable Care provisions, like the individual and employer mandates.

These proposals would be unacceptable for Democrats, and indeed would presumably be vetoed by Obama if passed.  However, as noted by Greg Sargent at the Washington Post in May, this would then provide Republicans with a potentially potent political line: “Claim they offered a reasonable “compromise” designed to spare all those millions of people from getting thrown off of insurance, while lamenting that Obama refused to go along with it …”

All in all, some rather sordid scheming, given all the lives on the line.  From the perspective of the progressive health care agenda, however, strategizing how to move beyond the ACA in the months and years ahead is far more important than the post King political jostling.

January 16, 2015 By Adam Gaffney in Uncategorized

Has the tide of health care justice turned — in the wrong direction? Last month, Vermont Governor Peter Shumlin announced that he could no longer “responsibly support” a funding plan for his long-awaited “single-payer” plan for the state. It wasn’t long before some on the Right claimed a historic victory … The article here, at Jacobin.